It’s all too apparent these days when you walk through a supermarket, a toy store or a department store and see children’s advertising that not a lot of images show both boys and girls in the same picture.

On one side, there are plenty of pictures of girls with plastic jewellery, dolls, cooking and hairdressing toys. On the other, boys are shooting away with guns, playing with action figures and are playing sports.

Top-Toy, a private company, have decided to drop gender roles in advertising in Swedish Toys 'R' Us stores. Girls and boys are together in cooking, hairdressing, shooting with fake guns and playing with action figures.

Gender equality has been very big in Sweden since the Second World War, when women had to work in factories and other jobs typically assumed by men, whilst the men were fighting at battle. Top-Toy agreed to use these gender neutral images in their catalogues last year after being criticised for using too many stereotypes in their previous issue. Despite this, other countries don’t get quite the same benefit as Sweden when it comes to Top-Toy’s catalogues. 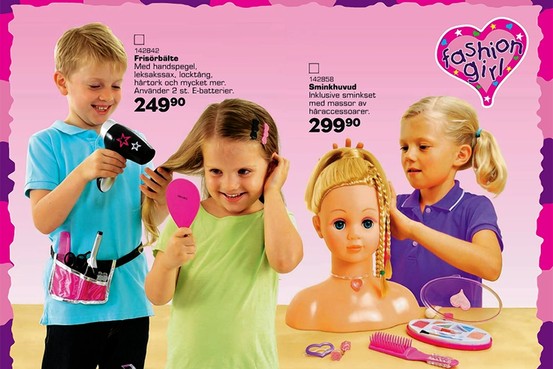 In the image above, a boy and two girls are playing hairdresser together, showing that it doesn’t matter on sex, you can still buy this product and yes, boys can enjoy hairdressing. 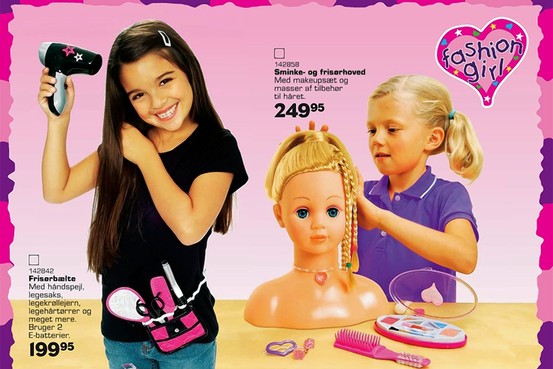 The image above is the same product’s advertising in Denmark. As you can see, the boy helping the girl dry her hair is replaced by an older girl who can do it herself. This shows how much Sweden has advanced when it comes to gender roles.

The line between gender roles has been blurred even more by a pre-school in Stockholm’s Old Town. Men have been added to the previously all-female staff that is supporting the children of their school equally despite sex. Instead of using him and her, teachers use the Swedish pronoun hen, which is gender neutral to respect that they might not want to be put in a metaphorical boy/girl box that our society expects us to today. They are all referred to as ‘friends’.

All toys are shared by everyone, and staff encourage the kids to play with whichever toys they liked, be it building blocks or doll houses. When a boy falls, he is given as much attention and help as he needs before getting back to playing. He is not told to “suck it up” or to “toughen up”, and girls are not babied any more than they need to be. Men in Sweden share more work with their partners, and women with theirs, as a result of Sweden’s gender neutralising.

People have been criticising these moves in Sweden, including Thomas Pascoe, a writer for The Telegraph. Late last year, he wrote, “Boys will be girls, as they say in Sweden”. He said that these moves were bizarre. He saw Sweden’s attempts at a more gender neutral society as attempts at turning boys into girls. In this country, girls are allowed to dress in typical boys’ clothing without getting too much hassle. The term tomboy has been around for a while. Despite this it seems boys aren’t allowed to dress up in typical girls’ clothing without doing so for a comical effect. "No boy grows up dreaming of being a princess. I find it hard to believe many little girls grow up wanting to shoot people.”

Jenny StrÃ¶mstedt of the Swedish tabloid Expressmen responded quickly, addressing it to Fred Flinstone, since Pascoe, “seems convinced that we still live in caves”. She then went on to say that Pascoe must be connecting images of boy playing with toy vacuums to Swedish women's "sexual nihilism".

Personally, I am in great favour of Sweden’s great leaps forward in terms of gender equality. I believe that Thomas Pascoe should respect the views of others, and definitely those who don’t fit into their assigned gender roles or are transgender in this case. I’d love to see similar advertising campaigns in this country, as well as campaigns like JC Penney’s same sex Father’s Day ad in the USA. We see advertising so much every day, so I think adverts should represent the positive steps forward of society to show that it’s OK to be a girly boy, gay, a tomboy, transgender or any other minority group. Sweden’s done much more than furnish our homes and send over a pop group to sing Mamma Mia, it seems. Thanks, Sweden.

Sources: The Wall Street Journal [1 + 2], The New York Times and The Local

Great article MarshMallo, check you out with your sources!

This is an excellent article. Feature, anyone?
Thoroughly enjoyed reading it.
I agree with you. Whilst there are undeniable biological differences between men and women, boys and girls, these should not intefere with society anymore than they need to.

Very interesting and well-written article! Trust The Telegraph to be backward and Sweden to once again be at the front of forward thinking. Gender stereotyping has always concerned me - especially how we appear to be segregated into blues and pinks from birth! I'm glad one country is abolishing the sexual apartheid of assumption, and hopefully others, including the UK, will follow.

I recently read a blog post by a woman who was refusing to buy her daughter "girl's toys" because she felt that it would reinnforce gender stereotypes and force her daughter into identifying as female at too young an age.

While I appreciate what she was trying to do, I think she was wrong. It's all very well to encourage a child to play with toys that aren't targeted at their gender, but if you start forcing a girl to play with boy's toys, or vice versa, that's just as bad as making a child adhere to gender stereotypes.

Let children play with what they want to play with, regardless of which gender it's targeted at, and we'll let the rest sort itself out from there.

great article, really interesting read - certainly makes you think about advertising..
one thing though - Sweden was nuetral in ww2 and did not take part in the war in terms of armed conflict (sorry #lovehistory !)

What does Sweden being neutral have to do with anything? =P

"Gender equality has been very big in Sweden since the Second World War, when women had to work in factories and other jobs typically assumed by men, whilst the men were fighting at battle."

@769 was saying that the men weren't likely to be fighting at battle if they didn't take part in the war in terms of armed conflict. My mistake.

Go Sweden! I really wish we could ditch these awful gender roles society has imposed. I don't know why people get so worked up about girls who want to play with cars or boys who want to play Barbie. The worst thing I've experienced is people who suspect that their child will grow up gay. Oddly, no, toys can't define a child's sexuality. And if they were gay? So what? Honestly, it's unhealthy to force things on children.

Thanks MarshMallo for this fantastic article. I think I may use it in future when talking to people who find the concept of gender-neutral very strange.I agree with rummyroo, hopefully the UK (and other countries) will follow. Fingers crossed.